TKO Graphix has been privileged to work with the Harding Group for more than ten years. Over that time we’ve provided them with vehicle graphics, signage, and promotional products. But this year is different, this year is special. Because this year we’re excited to be working with Harding Racing. 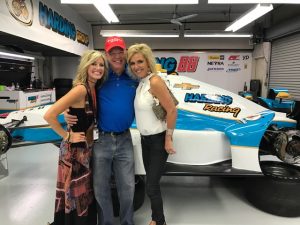 Mike Harding is a hands-on team owner who has put together an all-star team with Larry Curry as Team Manager and Director of Competition, and Al Unser Jr as Executive Consultant/Driver Coach. With rising star Gabby Chaves, behind the wheel of the Harding Racing 88.

Here are TKO Teammates Azure and Sheila with Little Al.

Who is Gabby Chaves?

“At the age of twenty-three, Gabby Chaves has made a name for himself by winning races and challenging for championship titles. The well-liked and respected Chaves began his racing career at the age of thirteen and has won three championships (Formula BMW Pacific, Formula BMW Americas, and Indy Lights), and two Rookie of the Year awards (2015 Sunoco Indianapolis 500, and 2015 Verizon Indy Car Series).” — Harding Racing Gabby Chaves 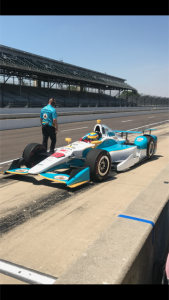 May has been a fun month for TKO Graphix. We’re race fans. We’ve wrapped race cars in several series for many years. We even wrapped the Indy 500 winner a few years ago, but like I said, this year is special because our friends at Harding Racing are in the Indy 500. Our organization has more than 100 employee installers, but guess who’s been at the Harding Racing Indy Car Garage installing graphics? It’s TKO Graphix President, Tom Taulman. He’s a race fan too.

“The Verizon Indy Car Series is the fastest and most innovative form of motorsports in North America. INDYCAR is the featured racing series in the “Greatest Spectacle in Racing” – The Indianapolis 500 – which will run it’s 101st event on May 28, 2017.”

Harding Racing has assembled a team of highly successful racing professionals to participate in the Verizon Indy Car Series. The team is comprised of members that have won multiple pole position awards, race wins, and championships.” — Behind the Scenes

Start Your Engines! If you see us at the track you know we’ll be rooting for number 88, wearing our Harding Racing Team apparel with the TKO Graphix logo. We couldn’t be prouder.