How Can You Measure the ROI of Fleet Graphics?

So, how can you measure the ROI of fleet graphics? There are several ways to accomplish this. I’ll share a few of them.

In a study by The Outdoor Advertising Association of America (OAAA),  Advertising, such as billboards and fleet graphics, reach 95% of Americans who are on the road. The question is, how can any business know if their fleet graphics are effective? How can they know the ROI?

A white paper shared by the shared by ATA (American Trucking Association) discovered that 75% of people developed a first impression about a company and its products from truck advertising. Furthermore, an impressive 91% of people stated that they not only noticed adverts on the side of trucks but could also remember them days later. Most importantly, however, the survey revealed that almost a third of people would base a buying decision on the impression they got from vehicle advertisements.

How Can You Measure the ROI of Fleet Graphics?

Use a Dedicated Phone Number

This is old school, but it still works. Use a phone number on your fleet vehicles that isn’t used anywhere else, and then track the calls, leads generated, and sales from this phone number.

This is a modern version of the dedicated phone number. Create a landing page that is only listed on your fleet vehicles and once again track leads and sales.

Create a Call to Action

Share a special offer such as first-time buyer discount, BOGO, or a free service. Track the response from inquiry to sale. “Vehicle graphics should promote action, through effective calls to action. Entice them, tell them what you do, and solve their problems. When you do this, customers will come calling. They’ll take action.” — How to Create an Effective Vehicle Graphic CTA (Call to Action)

Ask Prospects How They Found You 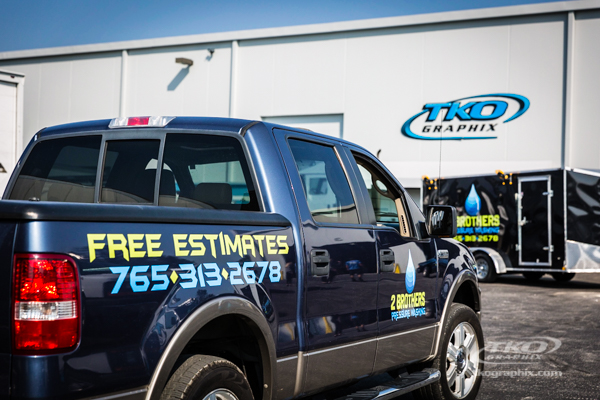 Asking a prospect how they heard of your business is the least accurate of these tracking methods because someone might see your truck, write down the web address, and then when asked how they found your business answer that it was the website.

It was the website, but they saw the fleet vehicle to learn of the website. Having said that, it does no harm to ask prospects how they heard of you.

Here are some stats on impressions (Statistics courtesy of the Outdoor Advertising Association of America):

So, How Can You Measure the ROI of Fleet Graphics?

So, how can you measure the ROI of fleet graphics? Can it be done? Yes, you can. It may not be perfect. However, if you use a dedicated phone line, create a separate landing page, promote a call to action, and ask prospects how they found you – you’ll have a pretty good idea.

If we can answer any questions or be of any service, Contact Us. We’ll keep track of you.

Photo by John Schnobrich on Unsplash