For more than 30 years TKO Graphix  has designed, fabricated and installed vehicle graphics on thousands of emergency vehicles including police cars. The key to vehicle graphics, in general, is to share a message. The message shared should be the priority message. It should be clear and unencumbered by multiple messages that aren’t as important. For some organizations prioritizing a single message is difficult. Not for police. There’s one primary police vehicle graphics message, and that’s the police are here.

Key 1 The Shield. Whether a shield, symbol, seal, or star is used it should be displayed prominently on both sides and rear trunk.

Key 3 Fonts. All fonts used need to be highly legible and authoritative. Police vehicle graphics aren’t the place to experiment with fun fonts, scripts, and italics. Can you imagine “POLICE” on the side of a car in comic sans?

Key 4 Emergency. Information and symbols for emergencies such as 911 or 311 should be smaller. Fenders are a standard location for emergency information.

Other Points to Consider

A Few of my Favorite Examples

“I live in Speedway, and although I see these cruisers all the time, I take them for granted. About an hour ago, as I returned from a visit to my dentist, I passed the Speedway Police station. Two patrol cars pulled out from the station and headed south—the same direction I traveled. I didn’t think about it because these are the good guys. They’re MY local law enforcement team, and I’m always happy to see them in our neighborhood. Then I realized — those vehicle decals look really good.

The cars are easy to recognize, distinguishable from other law enforcement agencies, and they project a strong image. The design is deceptively simple and effective, with colors fading from black to white, a block font in all caps, and very little else.” — Photo Blog: Speedway Police Cruiser Graphics 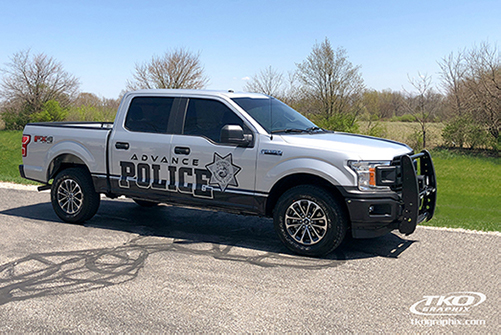 I was walking through TKO Graphix breakroom on my way to rinse out my coffee cup in preparation for my 7th cup of the day (hey, I’m not even shaking yet!) when I saw a gentleman with a rolled up decal. There were three letters visible on the decal – ICE so I asked him what department and he answered Advance, Indiana Police. His name is Brad Thomas. He’s the town marshal. I followed up by asking what he was doing at TKO and learned he was waiting for vehicle graphics on his new truck. It wasn’t until later that I learned Brad was making a difference.

Last year when he took over the job one of his first actions was to hand out Pop Tarts to the children of Advance every morning. Next, he started an after-school program in an 800 square foot room (there looking at a building and hoping for the funds to make it happen). I mentioned the town has a population of 490, think about this 45 or more kids show up every day for the after-school program, that’s 10 % of the population.

They do their homework, eat dinner, and then they go outdoors in the fresh air and play. When Brad began the after-school program it was pretty much all on him, now at least ten volunteers show up every night – teachers, preachers, and cooks.” — Brad Thomas Advance, IN Town Marshall, Making a Difference One Child at a Time 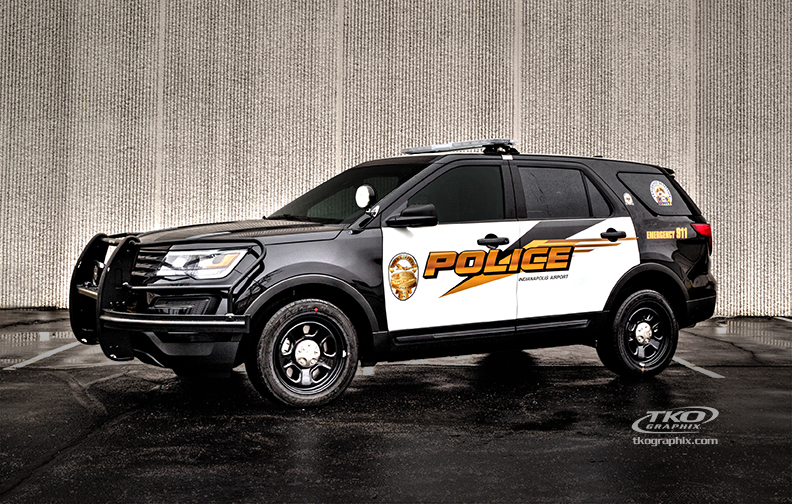 “My last traffic violation citation was for speeding. I was ticketed by an Indianapolis Airport Authority Police officer. It was me who was in the wrong. I was going too fast. Although I didn’t enjoy paying the fine, I have to say the deputy was professional, as well as personable.  So, what’s this have to do with the vehicle graphics? Not a thing, but I wanted to share that the Indianapolis Police Authority is made up of good people who are great customers to partner with.

It Should Stand Out!

An emergency vehicle has to stand out. Sirens alone aren’t enough. People need to know a police car as soon as they see it. I’ve seen emergency vehicles where it wasn’t instantly evident that it was an emergency vehicle, and that’s not good. Not the case with the ADP (Airport Police Department) anyone who encounters this ADP Ford Explorer knows who it is at first glance.” — Indianapolis Airport Authority Vehicle Graphics 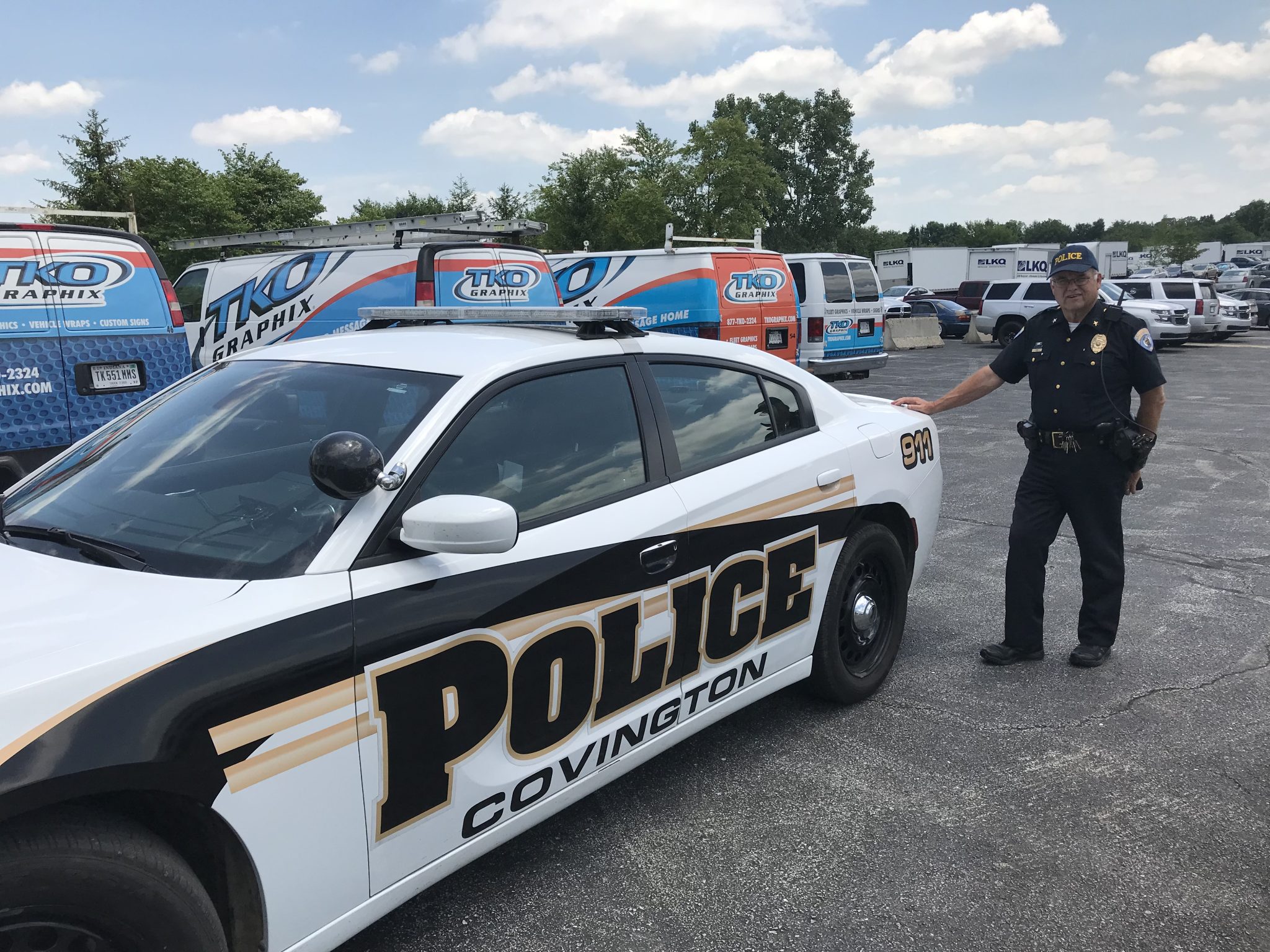 “I met Chief Sowers of the Covington, Indiana Police Department, while he was waiting for his patrol car to receive graphics. We chatted for a few minutes, and he told me TKO Graphix had produced and installed the graphics on all the forces vehicles for several years. I later learned that he didn’t know that TKO does more than vehicle graphics.

The Chief had visited TKO’s Plainfield facility at least ½ dozen times. I asked if he’d ever taken a tour. He hadn’t and told me he would enjoy that.

We began in our design department where I explained our staff of designers averaged more than 15 years’ experience. They specialize in getting the message delivered. With digital print, it’s easy to do too much and lose the message – not with our team. We drive your message home.” — TKO Does More Than Graphics

The featured photo for this post is the Plainfield, IN Police. I mentioned earlier I live in Speedway and take their patrol cars for granted. Well, I work in Plainfield and do the same with the Plainfield Police vehicles. However, as you can see in the photo, these are awesome examples of what a police vehicle should look like. Instantly recognizable, no-nonsense fonts, and great contrast. This vehicle demands respect and exudes authority.

If you have any questions or you’d like to learn more about police vehicle graphics, Contact Us.